Last week my wife and I had the honour to serve the people of Guatemala City.  We made a short video of the experience.  Over forty years ago a man named John started an orphanage in Guatemala to care for children who had been abandoned by their families.  He is now known as Tio Juan. In 2007/2008 The Church of Jesus Christ of Latter-Day Saints built a dental clinic at his orphanage and have provided dentistry volunteers since then.

We helped three groups of people.  The first was a group of children whose parents sell wares on the streets. Without the intervention of volunteers they would be on the streets without any education and they would not have access to any healthcare. The mayors wife has organized a school for them. The beautiful children arrived in groups.  Some lived in pain fault because of decay and abscesses. The second group we cared for were Tio Juan’s orphans. Theses young men and women come every six to twelve months and actually have pretty good dental health. Without Tio Juan they would be in the same sad condition as the first group.  The third group were a handful of missionaries that traveled many hours to get it if pain so they could continue their important work.  The children were so beautiful, but because of there diet and education they had many dental problems. We provided simple care like fillings, extractions, cleanings and sealants. The need was so great we could help these children 24/7 and not catch up.  We could just make a small difference for each child. The contrast of Guatemala’s poverty helped me realize how well we live here in the Okanagan valley.  Our children have access to excellent education and excellent health care.  As adults we have access to the very best portions for replacing teeth when needed – dental implants, crowns, bridges and dentures.

When we go back, we plan to expand our impact and will invite you to join us in giving back to the people of central america that lack the basics that we take fir granted.  Please watch the video we made to share the experience. 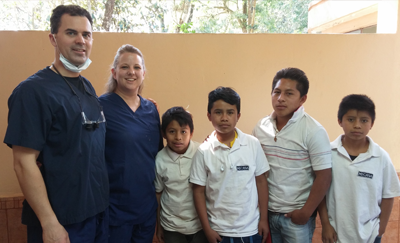